What is Celery Root, and What Do I Do with It?

Celery root is also known as celeriac. It is a versatile root vegetable used for stews, soups, slaws and salads. It can also be used as a substitute for a healthy mashed potato. Celery root is not the root of the celery stalks we see in stores. It is closely related, though – celery root is grown specifically for the root instead of the stalks. 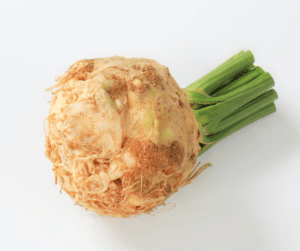 Celery root is a round-ish bulb approximately the size of a grapefruit. It has a mild taste and has been described as having a slightly sweeter celery flavor than the celery stalks we’re used to eating.

With the keto/low carb diet craze, this veggie fits right in as it has fewer carbs than potatoes, sweet potatoes or turnips, roughly 7 grams of net carbs per cup. Celery root is high in fiber and a good source of vitamins B6, C and K. It also contains important minerals, such as phosphorus, potassium and manganese which are important for bone health. You’ll also love that it’s low in fat and calories.

Many consider celery root a fall or winter vegetable because it is perfect for a stew. It also tastes fantastic in a salad or slaw with apples, pears, radishes, pine nuts, walnuts and lettuce.

How Do I Cut a Celery Root?

Although celery root is intimidating to look at, it’s pretty simple to prepare. The bumpy surface makes using a peeler very hard, so you will want to use a sharp knife to peel the root.

You can stand the root on a cutting board by slicing the top and bottom. Using your knife, cut off all the slightly hairy brown peel. The inside of the root is cream-colored, so continue peeling until all the brown peel is gone.

Are There Various Ways to Prepare Celery Root?

Why is celery root becoming a fast favorite among cooks? It’s because there are so many ways to prepare it. Celeriac is a root vegetable closely related to celery. It can be enjoyed raw or cooked and works well grated in salads or slaws, as well as mashed, baked, roasted or boiled. The peeled root can be boiled and mashed alone or with mashed potatoes or sweet potatoes.

Small slices or cubes of the root are great in a winter stew or a fall soup. You can use your spiralizer and make “noodles” with it. The mild flavor makes it a perfect substitute for traditional pasta.

Give our Celery Root & Apple Slaw a try, and let us know what you think of this veggie! 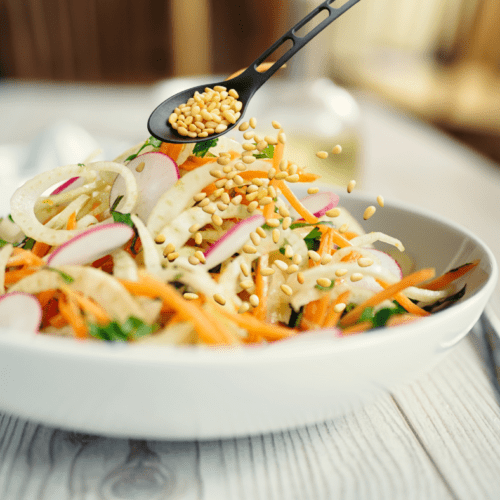 This delicious anti-inflammatory recipe is a great twist on a traditional slaw with the health benefits of celery root, apple cider vinegar and apples. Give it a try and let us know what you think!
Print Recipe Pin Recipe
Course Salad, Side Dish
Servings 8

If you’re interested in an anti-inflammatory lifestyle and more recipes like this one, check out The Official Anti-Inflammatory Diet Masterclass.  Or email us at info@vitalityconsultantsllc.com for more details.