A slow cooker is a great way to prepare a meal and make for an easier evening!  It eliminates the temptation to order carry-out which is often less nutritious and more expensive. Since you are placing all the ingredients in the slow cooker, it saves prep time and cuts down on clean up!

Many people think of a slow cooker as a winter option – coming home to the aroma of hot soup is so warming on a cold winter day.  But it’s also great for summertime use as a slow cooker or Crock-Pot does not heat up the kitchen the way your oven might.  It also uses less electricity than an oven.

As a result of the long, low-temperature cooking, a slow cooker brings out the flavor in foods and helps tenderize less expensive cuts of meat.

Here are some basic tips about using a slow cooker or Crock-Pot:

Now that you know of the many benefits of cooking with a slow cooker or Crock-Pot, let’s get started with a delicious anti-inflammatory recipe! 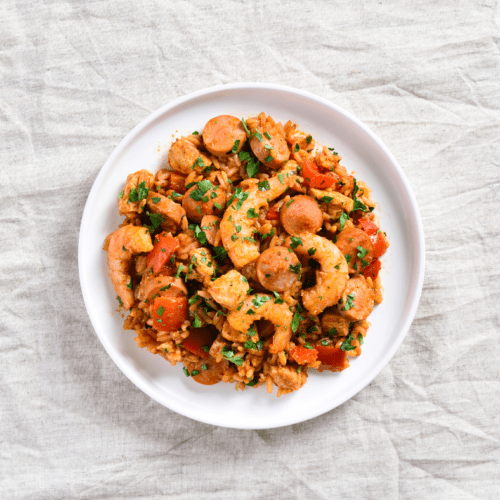 Jambalaya is a savory Creole or Cajun dish, popularly associated with the U.S. state of Louisiana, consisting of meat (pork, chicken), seafood (shrimp, crab, crawfish), or both and cooked with vegetables, stock, rice and various seasonings. We have taken a classic recipe and created an anti-inflammatory version that will keep you coming back for more!
Print Recipe Pin Recipe
Prep Time 20 mins
Course Main Course
Servings 8